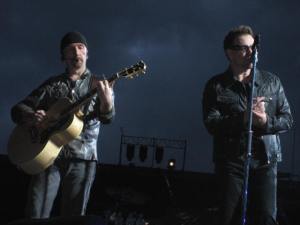 When I attended my first U2 concert a little over a year ago, I was startled to discover midway through the concert that I was praying aloud. Three weeks ago, as I again experienced U2 360, this time in Edmonton, I had the same experience of vacillating between a rock concert and a worship service. I’ve been to a lot of concerts, some Christian musicians, most not, but no matter how much I enjoyed them, I don’t think I ever felt like praying out loud – I definitely didn’t do so.

(Big aside: I realize that, in calling U2 worship leaders, I’m raising all kinds of “worship of what” flags for you. I know that not all fans of U2 are Christians [a brief survey of the crowd in my immediate vicinity on June 1st would have told me that, if I didn’t already know], and Bono obviously did not lead 65,000 people to Christ at Commonwealth Stadium on a warm Wednesday night in Edmonton. Now let’s move on.)

I’ve spent much of my time between June 1st and June 21st wondering why U2 concerts sometimes, if not always, become worship experiences (and getting way too fascinated by set lists, thus delaying this post almost inexcusably). Here’s what I have come up with: 5 reasons Bono and U2 are some of the greatest worship leaders of our time:

So… why do these five elements make U2 one of the best worship bands of our time?

But what I’m most impressed with, and what I feel is most lacking in our worship leading – what U2 does successfully over, and over, and over again – is to lead their audience in a RESPONSE. They consistently answer, strongly and clearly, the question: now what?

All too often in our worship services we are content to sing one more song of praise and then “dismiss” the congregation – as if school is over for the day. Even school children get homework.

What is the point of a weekly worship service? To encourage one another, yes. To hear the word of God, certainly. To teach and be taught, no doubt. But what we so often miss is that a worship service should send people out. Should call people to do something.